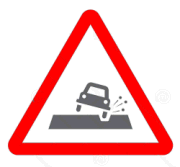 Potholes, dangerous road edges, broken drains and other issues relating to the condition of the roads can be reported to a direct email address at Argyll & Bute council. The form to fill in is at:

Whilst the Community Council secretary regularly sends in emails, comments from individuals are also appreciated.

This application is the culmination of a lengthy process dating back to March 2015, during which the Community Council has striven to reflect the views of all the community. As shown by the comments on the planning website, opinions are broadly polarised between those who are certain that the site known as 1a which was recommended by the stakeholders is best, and a group known as “Save our Seil” who are equally convinced that it is not.

To ensure we have obtained the views of as many people as possible, including those who might not speak at public meetings or make their views known directly, we conducted a survey to inform our submission as Statutory Consultees, having first informed the community of the Planning Application Reference, where to see it on the Argyll & Bute website, and where in the community we had made available hard copies of the application.

By law we could only write to those on the Open Register for our area (289 of the c550 on the Electoral Register). Prior to the survey we invited all other residents or property owners – via a public meeting and published minutes, email lists, website, Facebook and newsletter delivered to each household – to contact us if they wished to receive a letter. 21 did. Therefore, we wrote to 310 people, approximately 60% of those on the Electoral Register, asking if they think the Community Council should support the application, object to the application or express no view either way. We also asked for any other comments relevant to the planning application. It was stressed that a response to our survey in no way replaced individual submissions – we encouraged everyone to submit comments via the Argyll & Bute website. All responses to the survey were anonymous.

94 responses (c30% of letters sent and c17% of total constituents) were received.

Respondents who think the CC should support the application commented that Scottish Water had consulted with the local community and they wanted to “commend” the organisation for the way this had been done. The choice of site had been made after much consideration. They considered this to be the “best option” and the “perfect solution”. It was “better than other options” and they “supported Scottish Water’s decision”.

Those respondents who think the CC should object to the application stated that “the wider community had had no impact on deciding options”.

Several responses were concerned about the delay and the continued discharge into Balvicar Bay. They didn’t want to “stand in the way of progress” and wanted Scottish Water to “just get on with it”.

2. Environmental Issues Regarding the Site

It was noted that an Environmental Impact Assessment had not been done. There were numerous concerns expressed by those who think the Community Council should object to the application regarding the development within a “countryside zone”. It was noted that this application is on a “greenfield site” contrary to planning policy when a “brownfield site exists as an alternative location”.
It was suggested that the “site will destroy habitat”. One respondent suggested “noise pollution was anticipated”, and another that there would be “odour issues particularly in dry weather”.

Respondents who think the CC should support the application stated that there would be “minimal environmental impact” on a “small area of rough grazing land of little financial value” and the building would “not detract from notable view”. One response suggested that the works would “improve wildlife corridors”. Other comments said the “works were not near residents’ homes” on an “in-land, boggy site where few people ever go”.

There was a concern regarding the overflow from the treatment works and that this would still be into Balvicar Bay. The works were not “climate change proof” and with the increase in extreme weather conditions “storms would cause more overflow leading to an increased risk of flooding at Balvicar Stores”. There would be “damage to important peatland” by works to the access to the site and “destroy habitat”.

Responses commented on the “cleaning up of the existing site” at Clachan Seil and plans for improvements in this area were noted.

One response advised that the scheme does not allow for minimising micro-plastic waste.

It was noted that the scheme is “not designed for an increase in population” and “cannot be expanded” to accommodate additional residents, in particular those of Ellenabeich.

It was suggested that the costs of this proposed option are “double previous proposals”.

It is not the role of the Community Council to determine which site is “right” but to reflect the views of our community. Whilst we have made every reasonable effort to consult with everyone it is clear from the table above that the majority have not expressed a view, which may indicate that they are neither opposed to or supportive of the application. However, it is likely that most residents will be affected by this major project.

In the short term during the construction period, the Community Council shares concerns which have been expressed about traffic and general disruption to the island. If this application is approved, we would urge work on the Clachan Seil site and the Seaview septic tank site to be phased to avoid simultaneous disruption of most of the island – a repeat of the appalling situation caused by Scottish Water’s two previous projects: the replacement water main and the existing treatment works.

In the long term it must be recognised that the construction of a sewage treatment plant in a hitherto untouched area of Seil is bound to have an impact, as will the access road creating a new junction from the B844.

The planning application must be taken in the context of future developments and requirements for sewage treatment, for example at Ellenabeich where discharge goes into the Firth of Lorn Special Area of Conservation. This could potentially lead to yet another treatment plant on an island with approximately 300 dwellings, many of which will still not be connected to the system.

It has always been recognised that no one solution will please everyone. The Community Council hopes this survey has raised everyone’s awareness of the proposals, has given everyone the opportunity to make their views heard, and can inform Argyll & Bute’s response to this planning application.